Once again TheWife came home with a fantastic bundle of fresh vegetables in the farmer’s market basket. She excitedly pulled out some poblano peppers and asked “what can you do with these babies?”

Well, I could juggle them, I could do a puppet show with them…

The look on her face was probably close to the look on yours.  So, I gave her a real answer…  SOUP of course!  It was even clearer of an idea when I dug through and found a huge bundle of cilantro and some jalapeno peppers in the basket, too.

I have only ever had poblano soup at one restaurant down in Texas City.  It was creamy, light, not spicy at all and delicious.  I was also keenly aware that my heart slowed down from eating it because it was so laden with heavy cream, etc.  To make this poblano soup, I wanted to try to get a little closer to “healthy” while still retaining the creamy smoothness.  To that end,  you will see I added a little milk and sour cream, but used potatoes instead to bring the soup some thickness.  Was it necessary?  No, it did not change the flavor at all…   Did it help?  Yes, adding both (and just a little) at the end brought a fantastic creaminess without adding a ton of unnecessary heaviness.

4 large poblano peppers
3 cups worth of Red potatoes (usually 3 or 4 potatoes… you don’t have to be exact)
2 tbsp salted butter
2 cups of diced onions
3 minced garlic cloves
1 jalapeno pepper
32oz Chicken broth
1 small bundle of cilantro, rough cut (how much is a bundle? what you can grab with your hand.  add more or less depending on your taste!)
2 tbsp of 1% or 2% milk (could you use soymilk?  I will have to try it!)
1/4 cup of sour cream

With the broiler set to 450 degrees, place the poblano peppers on a sheet and stick them in the oven for 5 minutes; flip them onto the other side and leave them in until browned/burned looking. 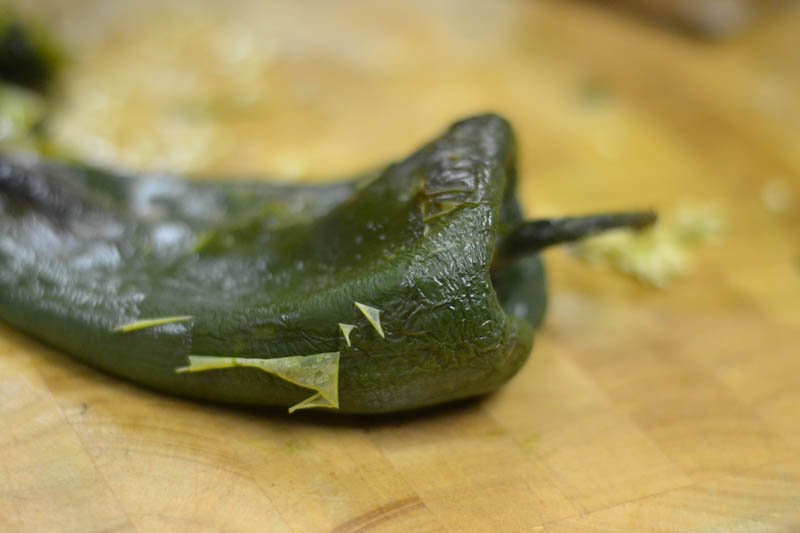 It has been years since I broiled poblano peppers.   At least that is the excuse I am using, because I did NOT keep them in long enough.  As you can see from my picture, they barely got roasted…. yes, you are doing this for flavor but MORE so you are doing it to get the skin off. So do it longer than I did.

When they are properly roasted, put them in a brown paper sack. Or a white paper sack. or just a paper sack… close it up nice and tight and clip it.  You will leave them there for a good 10 minutes so they continue to steam themselves from the leftover heat. 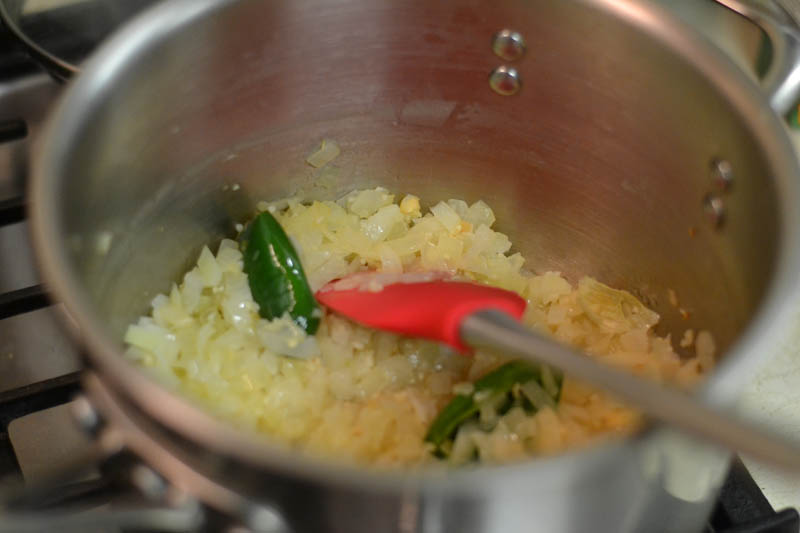 While those beautiful peppers are roasting and self-steaming, melt the butter in a 3 qt. saucepan (some people call it a small pot) and saute the onions. Take the seeds out of the jalapeno (I didn’t have to tell you this, did I?) and toss it into the onions as they saute.

Peel potatoes, cube them, and place them in a pot of boiling water until you can stab them easily with a fork.

Peel the skin off of the poblano peppers, cut them length wise and get rid of the seeds. 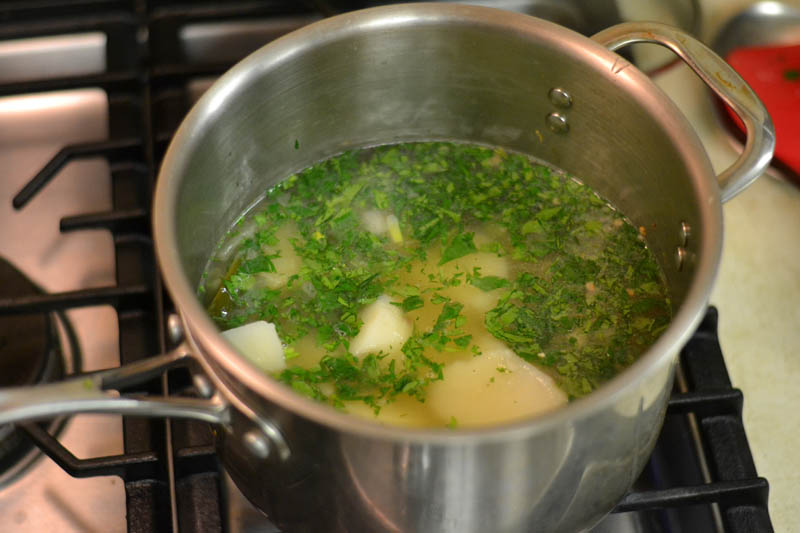 After about 5-6 minutes those onions should be looking translucent and golden, so take them off the heat.   Once the potatoes are done, drain the water, and add them to your onion/jalapeno mixture, pour in the chicken stock and add the cilantro. Toss in your salt, Bring to a boil and then take it off the heat. 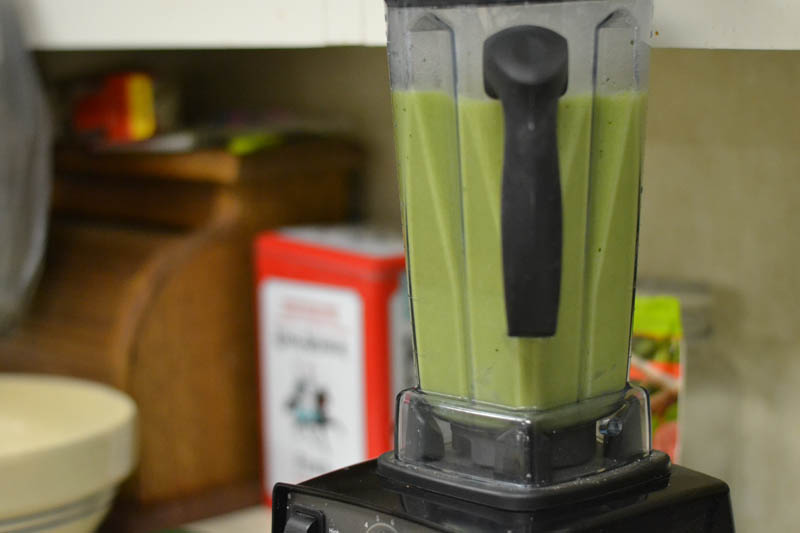 The next step is my kid’s favorite:  put it in my Vitamix and watch it mix together!  I have found I have to do this soup in two batches as it just is too much for a single batch.  Add half the mixture from the saucepan and two of your poblano peppers, then let the Vitamix do its job.  Repeat with the second batch, tasting as you go to see if it has enough salt for you.

One final step:  after both batches are blended/mixed together, now it is time to gently mix in your milk and your dollop of sour cream.  If you do it too early, the cooking process will separate the milk.  With all due respect to the Poblano Soups out there which rely on heavy doses of cream: From what I can tell there is no flavor difference… but there is a huge texture difference.  The potatoes give it body but the milk and sour cream give it a smooth, creamy quality.

All said and done, this soup took me all of 30 minutes. Probably one of the easier soups I have done… hands down one the most delicious!