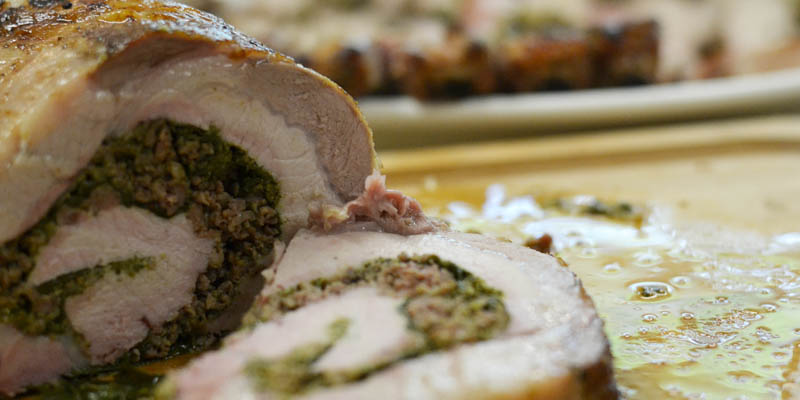 Easter is a fantastic time for cooking those special dishes.  Normally, I have the tradition of making a lamb dish but this year I was so busy I forgot to purchase it ahead of time. Ugh! How could I forget such an important thing?  Luckily, I have a great meat market here and the guy who owns it is a dear friend (just do not call him a butcher! He hates that). He was willing to hunt me up a leg of lamb but it was going to be frozen.  This meant defrosting and it probably not being ready in time for me to prep it for Easter.

Which meant this was TOTALLY a great excuse to try a recipe I saw!

Let me just stop… and admit it now… I have a little secret, it’s a guilty pleasure:  I really enjoy “the Kitchen”.   It is so campy and punny; enough to make you sick.  Enough so that it drives my wife from the room, retching.  And yet I have learned a lot of neat dishes as well as gotten some great tips from watching it… and it can put a smile on my face.

Especially that Jeff Mauro guy; he makes me laugh. So goofy!

Anyways, he did this sausage and spinach-stuffed bone-in pork loin that look amazing.  Stuffing then rolling the meat is a quick and easy way to visually elevate a dish.  It also helps season the inside so the meat has this uniform flavor which can’t be beat.

There were a few changes that I made to the recipe that you should know about:

1) the original recipe called for a 4lb, 6 rib bone in pork loin.  I had guests coming and wanted to make sure I could feed an army so I got an 8.5lb, 10 rib.  This was going to change our cooking time.  Plus, the fact I needed it to slowly cook in the oven while I was at church.
2) I seared it and then slow cooked it. Honestly, I think that was better!  The meat was so juicy all the way through and very evenly cooked.
3) I did not use parsley. I just am not a big fan, but I understood what the recipe was going for so I substituted arugula for the parsley.

The big win of this dish is the different flavors that come together to bring a brilliant balance in one bite; it is savory, sweet, bitter, salty, all with a hint of the garlic’s spiciness.  The purpose of paring the garlic, dates, and parsley together was to create a paste that was equally sweet, bitter, and spicy for the inside.

While parsley is bitter, there is also this green aftertaste that I am not a fan of. The substitution of arugula lost that grass-like smack on the palate but kept to the intent of the recipe with the bitter.

INGREDIENTS
Bone-in Pork Loin (I used an 8.5lb one with 10 ribs)
Notice: Do NOT have your meat cutter french the tips of the bone
Salt and freshly ground black pepper
3 cups of arugula
1 cup of pitted dates
¼ cup of olive oil
3 cloves of garlic
2lbs of crumbled sweet Italian sausage
4 cups of baby spinach

Pat down the pork loin to make it nice and dry. With the bone-side down, you can gently slice along the rib bones.  Do not go all the way through! 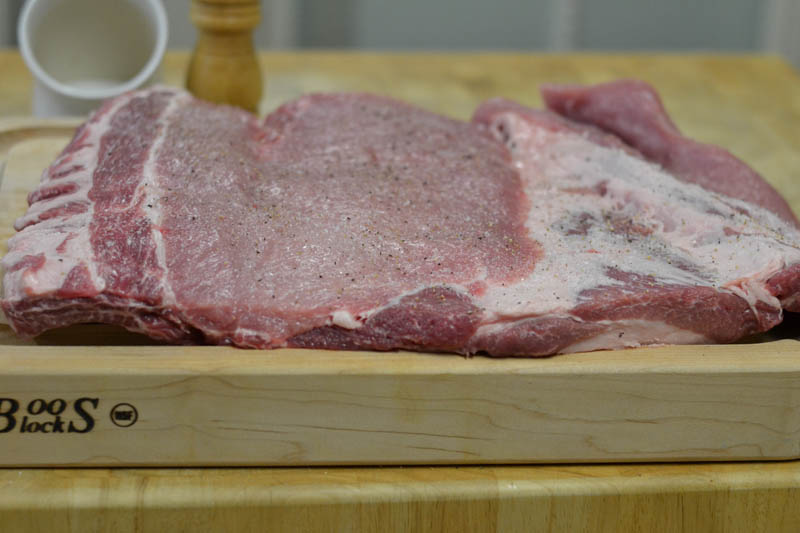 Instead, slowly peel the meat back away, making room to continue to slice through the meat, unfolding it as you go along.  If this scares you, you can always get your meat cutter (don’t call them butchers!) to do it for you.

Grab your trusty meat mallet, a piece of plastic wrap, and gently pound it until the meat is as evenly thick as you can get it.

Season all sides with salt and pepper

I am totally loving my new food processor! This thing is a dream.  i just wish I had remembered to take a picture of it… sigh.  Add your arugula into your processor, then the dates, olive oil, garlic and a dash of salt, pulsing until it forms a nice paste. This always means scraping down the sides at least once, if not twice. 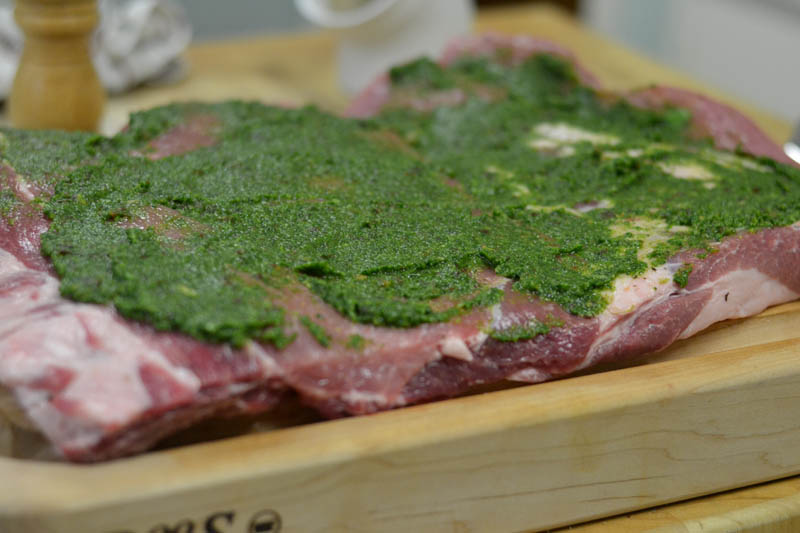 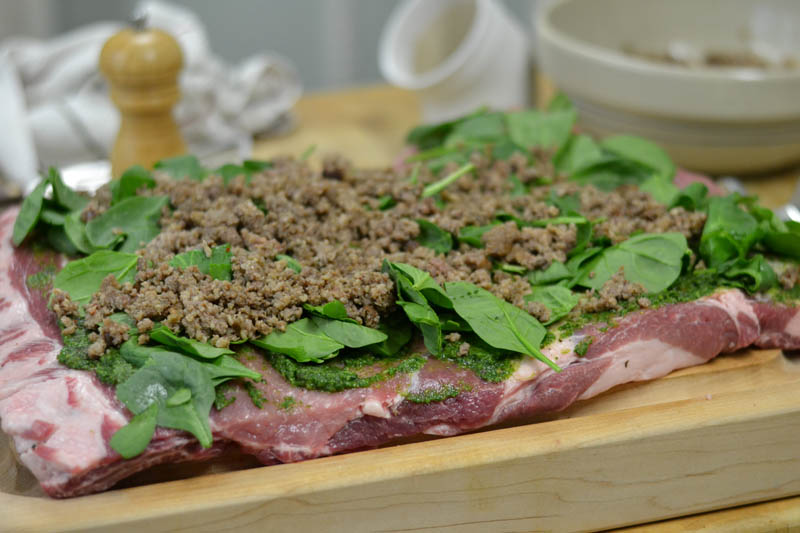 Tightly roll into a pinwheel. When I trussed it up, I saw a tip on the show that was not written in the recipe:  make a slice about an inch deep between each rib, then run the butcher twine in between each rib as you secure the meat.  I found it so much easier to do each end first and work my way toward the middle; the idea would be to not have the stuffing squeezed out of it. 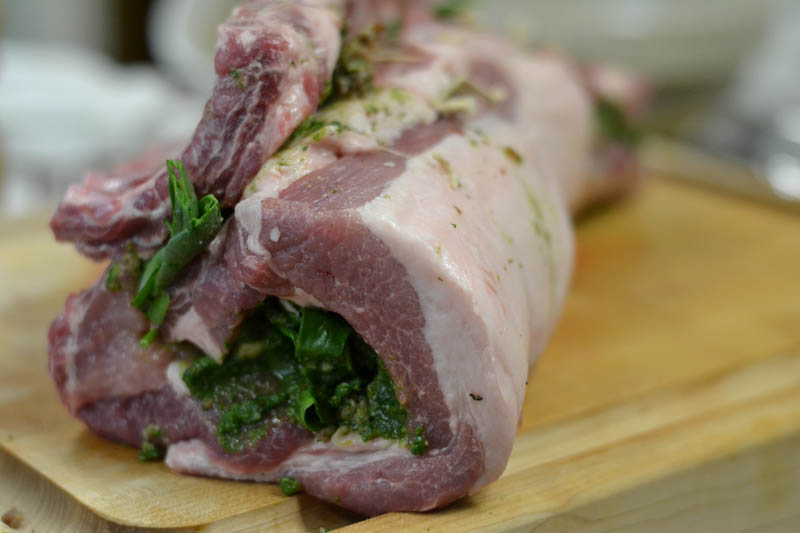 Because I could not follow the original instructions for baking, I did the following:

I heated up the roasting pan I was going to use to slow bake the pork loin over a medium high heat.  I put the fat side down and seared it over the heat for a few minutes, slowly rolling it to get a nice even brown crust.  Removing the loin, I deglazed the bottom of the roasting pan with 1 cup vegetable stock and 2 cups of water, then added the vegetables. 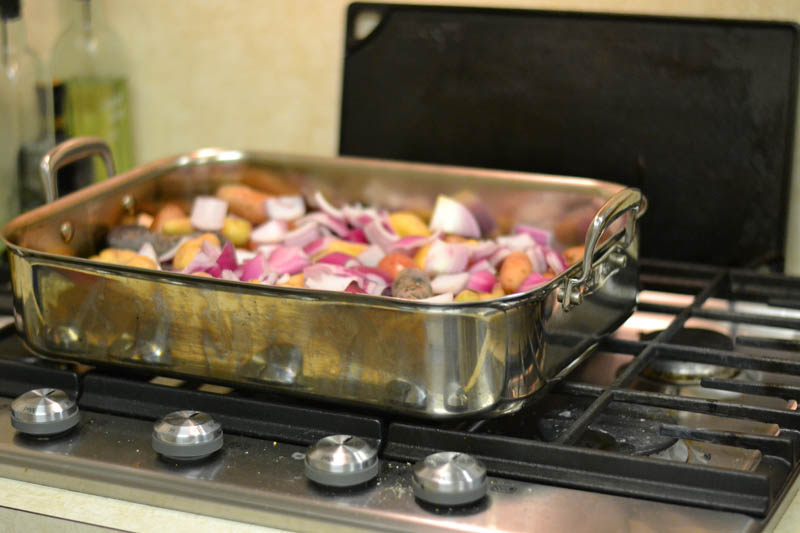 Putting the pork loin in a v-rack, I placed it on top of the vegetables and covered with tin foil. 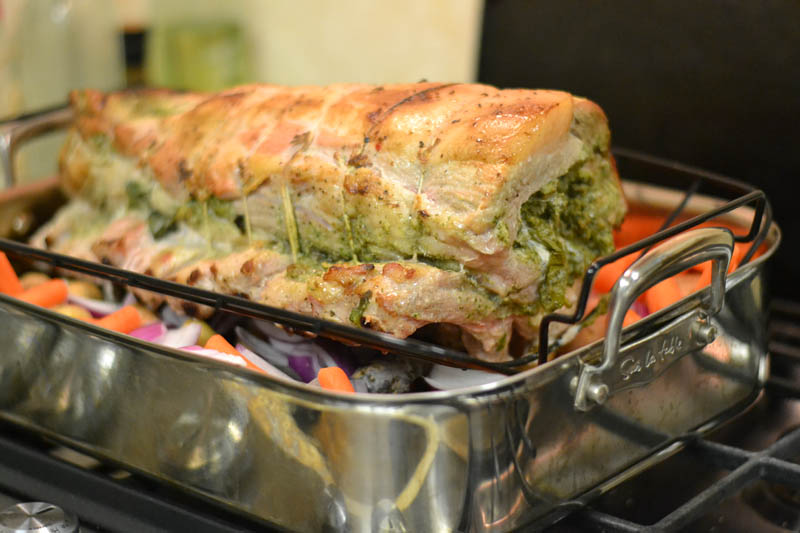 Roasted at 260 degrees for 5 hours and let it rest for 30 minutes, uncovered. 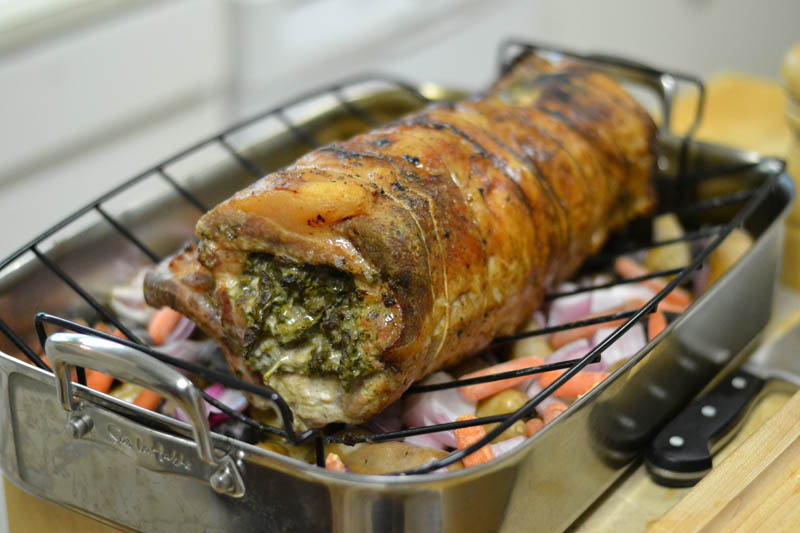 Trim the strings, and … man… was it ever juicy! 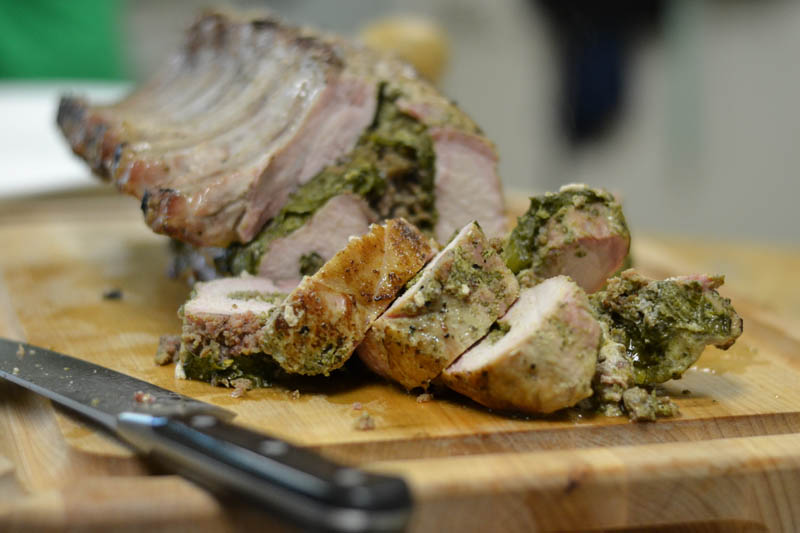 It made enough to have leftovers.  Pardon me while I go get another piece…